New York and the Magic of Christmas 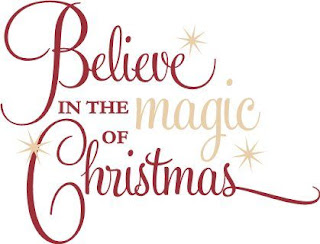 The magic of Christmas is synonymous with New York. There's the Thanksgiving Day Macy's Parade which always ends with the entrance of Santa Claus, the holiday classic Miracle on 34th Street, Radio City Music Hall and the Rockettes and of course, ice skating at Rockefeller Center with the spectacular Christmas Tree. While the tree was lit last year and there was a pre-taped Parade, it was very difficult to experience the magic of Christmas in New York and around the world. While many decked the halls of our homes on Thanksgiving with Christmas decorations, it was a challenge to feel the light and hope of the winter holidays surrounded by so much darkness and fear.

One year later we are emerging from the pandemic and New York City seemed to shine more brightly than it ever has. We were so blessed to be there before the crowds descended on the City and while the air was filled with the festivities of the holiday season.

We woke up early on Saturday morning to the setting moon: 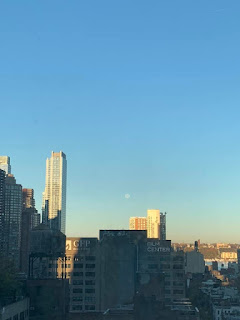 We took time to meditate before heading out on what we knew would be a whirlwind shopping and walking tour of the City. We didn't know just how much of a walking tour we would experience though!

After breakfast at the Majestic Delicatessen, we went to the M&M store where Ruth Anne wanted to bring back gifts for her co-workers who keep a supply of M&M's at their desks. On the way we saw windows decorated for Christmas. When Ruth Anne asked me what I wanted to do in New York,  I told her I wanted to take lots of pictures of her and of all of us being together. I wanted to celebrate being on our first vacation since February 2020 and the miracle of her healing from a traumatic brain injury. 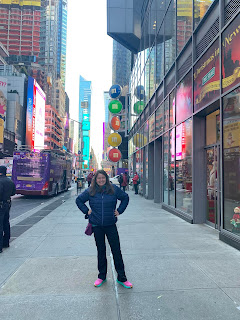 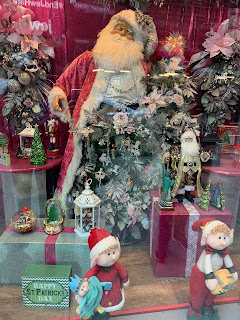 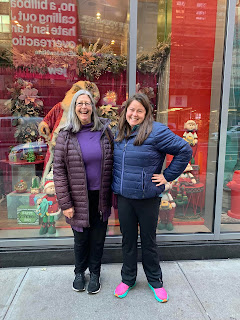 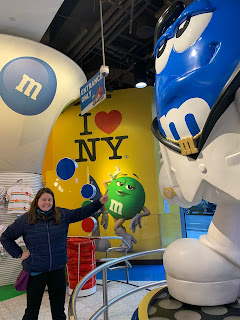 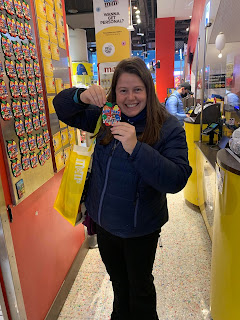 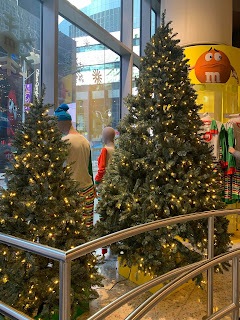 After experiencing the magic of the M&M store, Ruth Anne proudly sported her M&M shopping bag while we walked to Rockefeller Center. 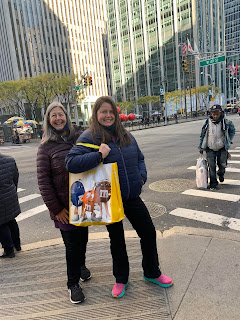 Even though the scaffolding was still on the tree while workers strung the lights and trimmed branches from the tree, the magic of Christmas filled the air. 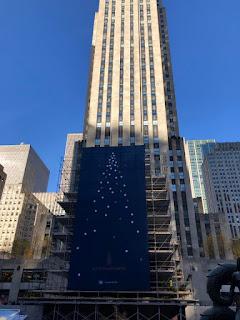 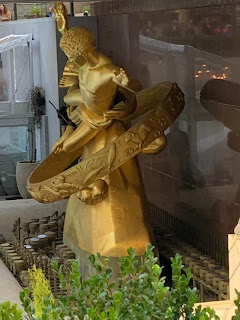 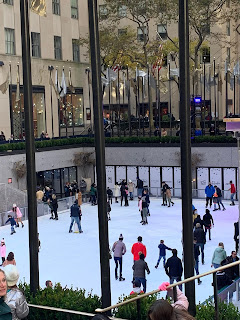 We stopped in the NBC Studio Store but it was a shadow of its former self. The Plaza in front of the NBC studios that would have people with their noses pressed to the glass watching the Today Show was empty. Yet there was a powerful sense of resilience and strength pulsating throughout the City. Our beloved restaurant, Cucina Cucina was closed apparently as a result of the pandemic.

By contrast, Radio City Music Hall was buzzing with excitement as throngs of people lined up to present their proof of vaccination and ID's to see the Holiday Show. 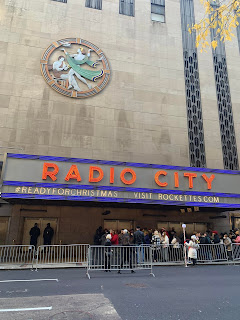 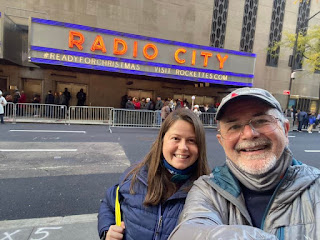 We made a stop at St. Patrick's Cathedral where we traditionally light a candle. I welled up with emotion to realize that when we were there 5 years ago with friends, we lit a candle for Ruth Anne who was critically ill. She lit a candle and we all hugged. 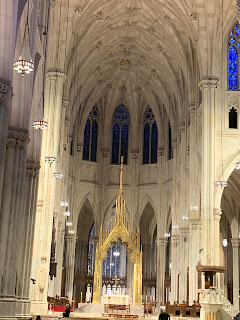 We were going to be up very late since we were going to the 8pm show of Jagged Little Pill. We are typically not late night people so we wanted to pace our day and decided to head back to the hotel. I grew up in Westchester and would often take the train into the City to meet my great Aunt Laura. She taught me how New York is a grid and took great care to explain how to navigate getting around the City on foot. Tom put on "Google girl" to direct us back to the hotel. I should have trusted my instincts and paid attention to where we were going. By the time I spoke up about our going in the wrong direction, we were another mile away from our hotel.

It felt so good to put our feet up and rest before heading out for lunch.

We had heard about Junior's from many of our friends who visited New York. It exceeded our expectations with service and food. We were planning to have lighter fare for lunch and have dinner at Mama Mia's but after seeing the menu and what people were eating, we decided to have a lunner since it was already 1:30 (thanks to our little detour). 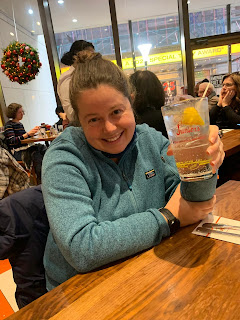 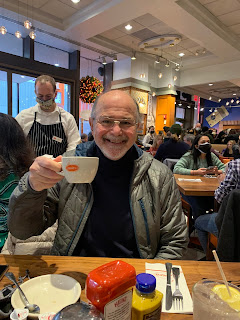 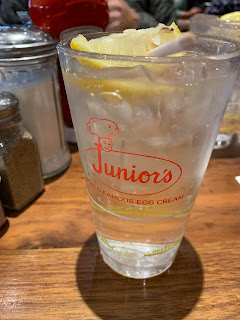 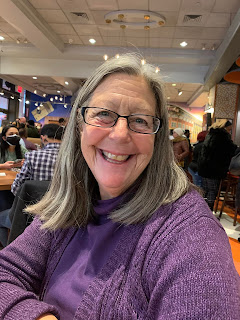 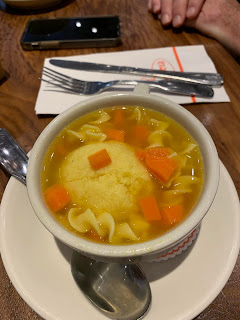 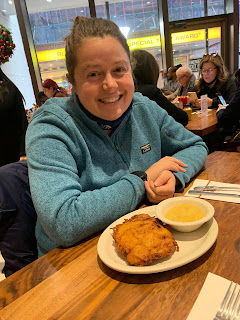 It was incredible to feel my Jewish roots and savor traditional Jewish food in New York.

Before heading back to the hotel, we went to see the marquis for Jagged Little Pill. 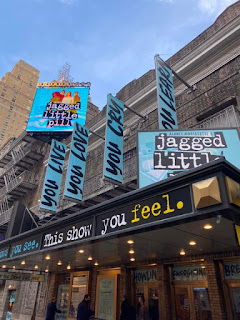 We felt the excitement build and the thrill of the lights being back on Broadway! 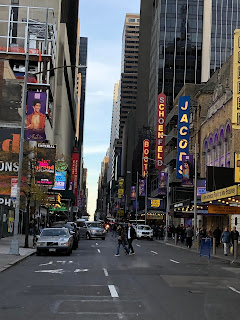 When we arrived back at the hotel at about 3:30, our friends from Voices of Hope Boston were just arriving. They were preparing for their Spring gala in March of 2020 which was shut down during rehearsals. We would see our Voices of Hope Boston friends at least twice a year at their shows. It was an emotional reunion and those hugs, even though we had masks on, were the best hugs I've ever felt.

They checked in while we went to our room to rest before it was time for the show!

From my heart to yours

In health and wellness,

Yes We Need a Little Christmas!

After a wonderful night's sleep with hearts overflowing with love and gratitude, we woke up for our final morning in New York. Tom and... 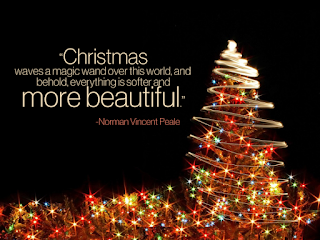